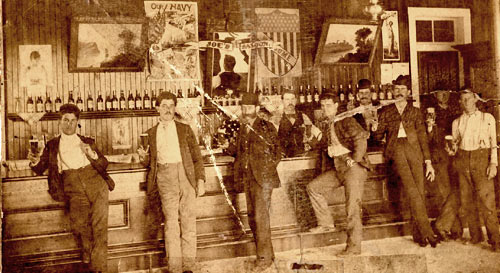 Interior of the Depot Saloon-SE/C Reynoir and Railroad Street

Marie Bellande seems to have been a woman of commerce.  In 1889, she leased the Reynoir Street corner to Joseph Charles DeLamare (1856-1931) for one year and $300.  On January 9, 1892, The Biloxi Herald announced that “the old Bellande Building near the depot has been torn down and the foundation is being laid for a two-story edifice”.

From the plats on pages   ? and  ? which were traced from insurance maps prepared by the Sanborn-Perris Map Company of New York, you can determine how the physical configuration of the Bellande tract changed during the period 1893-1904.