The French Hotel was located at Front Beach Drive and the east side of Martin Avenue comprising Lots 4 and 5 of the Austin Tract.  The hotel grounds comprised approximately .60 acres.

In later years, the French Hotel-Edwards House consisted of two buildings.  The primary structure was a front gable, two-story, wood frame house with an undercut gallery.  It faced the Bay of Biloxi near the beach front.

In 1927, The Edwards Family added a second story to the Creole cottage, and also increased the area of the structure to about 7000 square-feet.  The dining room had the capacity to seat three-hundred people.  A 600 square-foot, oak shaded pavilion sat near the beach.

At the rear of the Edward House lot, there was a two-story, wood frame structure.  It may have had a hip roof with an undercut gallery.  The building consisted of twelve bedrooms, six upstairs and six on the ground floor.  The rooms were approximately 14 x 20 feet.  They were simply furnished with a four poster Nunn bed, wash basin, and picture.  The bathroom and shower were located on the ground floor.  When the Keesler Air Force base boom began in the early 1940s, this edifice was converted to an apartment building to ease the housing shortage in the area.  A grape arbor was located near the stairway south of the building.  It and the pavilion were destroyed in the September 1947 Hurricane.

Marie Gouax immigrated from France or Corsica circa 1884, the same year that Antoine's younger brother, Jacques Bertuccini (1854-1943), immigrated to the United States.  Her nephew, Dr. Frank T. Gouax, was the health officer at Lafourche Parish, Louisiana, and would visit his aunt at Ocean Springs occaisionally.

Under the Bertuccinis' management, the French Hotel catered to French speaking visitors from New Orleans and rice and sugar planters from South Louisiana.  They came to Ocean Springs in the summer months to enjoy salt water bathing, cool breezes off the bay, and the medicinal waters which made the city famous.  There was a 750-foot pier in front of the hotel.  In 1904, a furnished room at the French Hotel rented for $3.00 per month.

The French Hotel was acclaimed for its food and locally produced Scuppernong and Concord wines.  The vineyards were destroyed in the 1947 Hurricane.  In January 1921, Antoine Bertuccini passed on, and Marie G. Bertuccini sold the hostelry to J.H. Edwards in June.  Mrs. Bertuccini moved to New Orleans in July 1921.  She returned to Ocean Springs in 1922, and married George W. Vance (1859-1940), a retiree from Iowa.  Mrs. Marie Bertuccini Vance died at Ocean Springs on August 31, 1930.  She is interred at the Bellande Cemetery.  Mr. Vance lived on in their Jackson Avenue home until his demise in February 1940.  His remains were shipped to Marksville, Kansas.(JXCO, Ms. Land Deed Bk. 50, p. 465)

When the Edwards family took over the French Hotel in 1921, there was no electricity.  These were the days when people convened in the evening after dinner for conversation.  The French Hotel had a 60 square-foot pavilion which encircled an oak tree on the beach around which hotel guests and people of the community would gather and exchange stories.

Mr. Edwards was both very industrious and frugal.  During the early days of his proprietorship of the French Hotel, he also operated  the Plaza Cafe located on the northwest corner of Desoto and Washington.  To equip his kitchen, Edwards purchased surplus WWI equipment from the Army camp at Deer Island.  Although it had won the reputation as one of the very best restaurants on the Gulf Coast, the Plaza Cafe closed in May 1924.

As the winter season was generally slow, he would work as a chef at the Great Southern Hotel at Gulfport, and at the Gulf Hills resort north of Ocean Springs.  Mr. Edwards was the first chef at Gulf Hills, when the hostelry formally opened in the winter of 1927.(The Jackson County Times, December 3, 1927, p. 1)

During the Great Depression of the 1930s, Mrs. Edwards and Ethel Shubert managed the beach front hostel.  As times were lean, J.H. Edwards found employment with the Fred Harvey system, which furnished gifted chefs for rail lines.  During this time of national economic crisis, Mr. Edwards also went to sea and was employed on ships.  In 1934, he left Ocean Springs to serve as chief steward aboard the S.S. Kenowis bound for the United Kingdom.  Edwards planned to visit his old home at Glascow, and his brother at London.(The Jackson County Times, January 6, 1934, and The Ocean Springs Record, April 19, 1979, p. 20)

At the time of his death in January 1950, Edwards was the chief steward on the Army transport Short Splice.  He died in the Marine Hospital at New Orleans.

Edwards anticipated a busy summer season for the French Hotel.  He needed additional time to prepare his beach front hostelry for the influx of visitors.

Mr. Edwards ran this advertisement in The Jackson County Times of July 1921:

The Edwards family operated the French Hotel as a summer resort until 1928, when it became a year-round inn.  In late 1927, the Edwards family made improvements to the old structure adding several rooms.  In conjunction with this work, the reception area, lounge room, and dining room were enlarged.  A new culinary department was added.  With the in stallation of a modern heating plant and several new bath rooms, the French Hotel became a complete and comfortable home for the traveler and visiting public.  An advertisement in The Jackson County Times of December 30, 1933 described the French Hotel as follows:

On July 11, 1936, The Jackson County Times reported that the 4th of July weekend was the largest ever seen along the Mississippi Gulf Coast.  At Ocean Springs tourist activity was particularly busy with the French Hotel and the Eglin House filled to capacity.  The Edwards were lauded by the journal for their kindness and concern for the welfare of stranded visitors.  This praise was expressed as follows:  We wish to commend Mr. and Mrs. J.H. Edwards of the French Hotel for their civic interest in giving personal attention to visitors who come to our city.  When their hotel was filled to overflowing Saturday and they were unable to accept any more guests, they went out in their car and assisted the visitors to find rooms in private homes in order that they might remain in Ocean Springs over the weekend and not be forced to go elsewhere.  (Local and Personal).

Mrs. Edwards was also civically active in other ways.  She served faithfully as the local chairperson for the March of Dimes Campaign in the 1940s and 1950s.  The hotel also served as the meeting place for the Rotary Club in the 1940s.  Their charter meeting dinner was held at the Edwards House.

In addition, Mrs. Edwards was a very charitable woman, as she allowed less fortunate, elderly persons to reside in her apartments at very reasonable rates.

Mrs. Edwards ran the hotel for many years until it was damaged by Hurricane Camille in August 1969.  The weight of trapped water caused the first floor to collapse.  Clarence Galle (1912-1986) tore down the main house after the infamous tempest, and the property was sold in December 1979 to Charles H. Jacoby.  Amelia Schubert Edwards expired on December 14, 1979.  Her corporal remains were interred in the Evergreen Cemetery on Old Fort Bayou.(JXCO, Ms. Land Deed Bk. 665, p. 68 and Wallace Edwards, March 1994)

In the summer-fall of 1997, Troy H. Vincent, proprietor of TVH, a subdivison development company and home builder, erected a Mediterranean style home on the old Edwards property at present day 303 Front Beach.  Mr. Vincent also built a fine pier on his riparian rights, which was destroyed by Hurricane Georges in late September 1998.  Katrina destroyed the Vincent home. 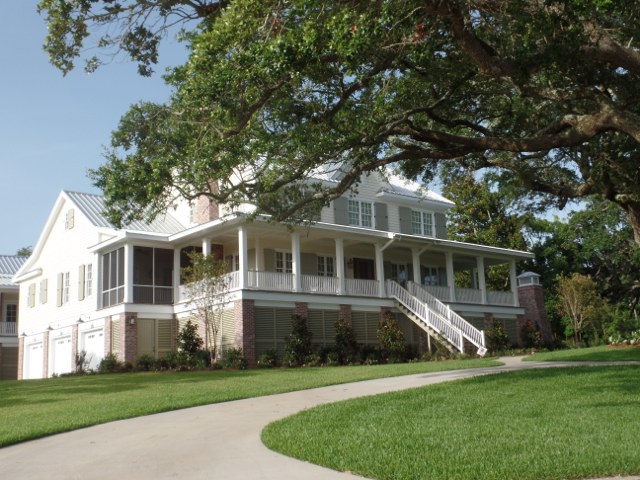 The Daily Herald, Know Your Coast, "The French Hotel of Ocean Springs" by Ray M. Thompson, 1957.