This structure was erected in the summer of 1956 by William 'Bill' Dunn and Judlin Girot for their business, Acme Photo Service.  Frank Galle was the contractor fo the 30-ft by 70-ft concrte and steel building.  In addition to the Lower 48 states, the company had customers in Alaska, Japan, and Korea with single accounts in South Africa and Pago Pago.  In Janaury 1958, Acme acquired Gulfphoto, a Biloxi competitor situated at 407 West Howard Avenue.  The vendors were George B. Leggett Jr. and Albert H. Rehnberg.[The Daily Herald, June 7, 1956, p. 24 and January 24, 1958, p. 8] 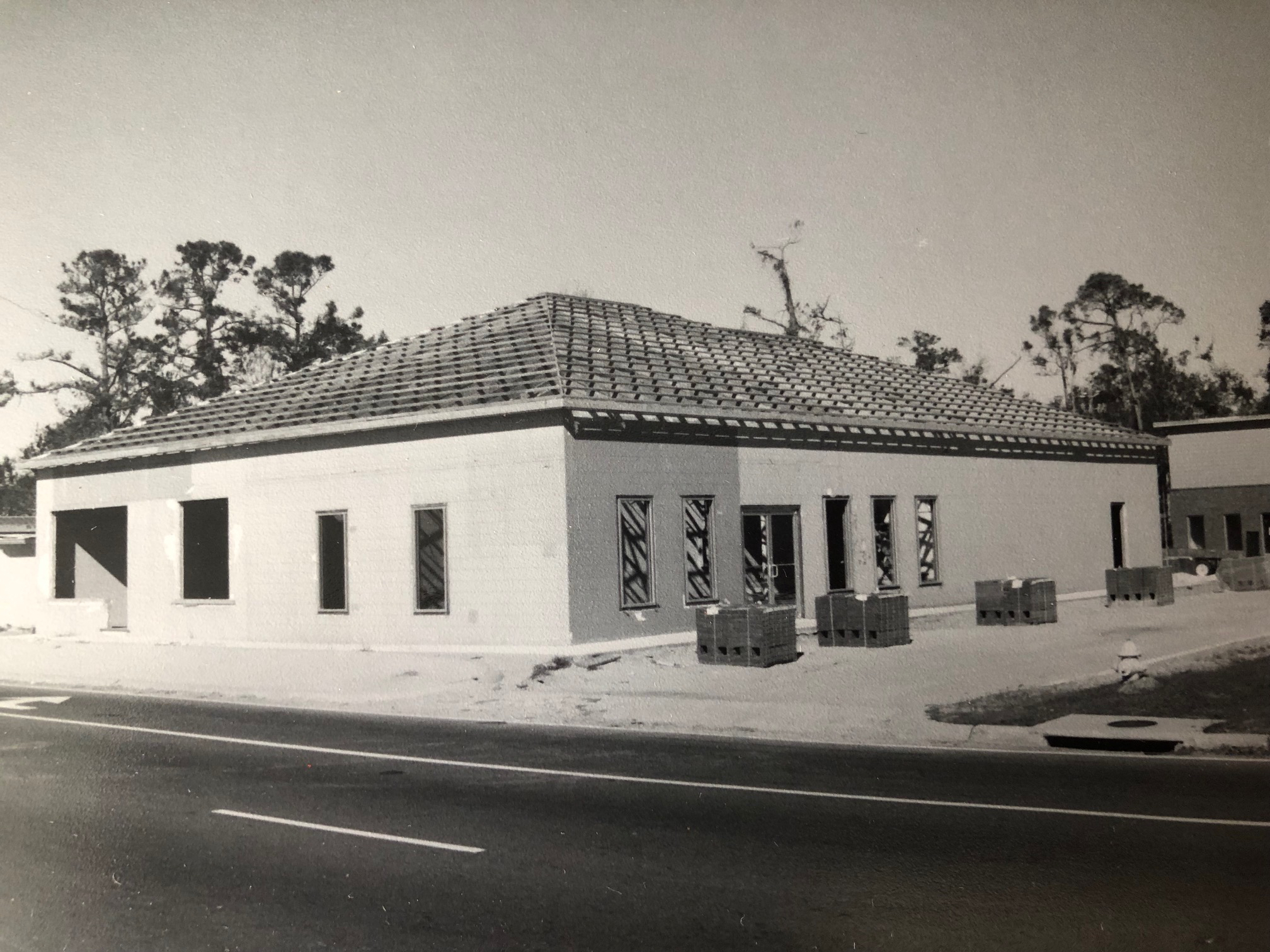 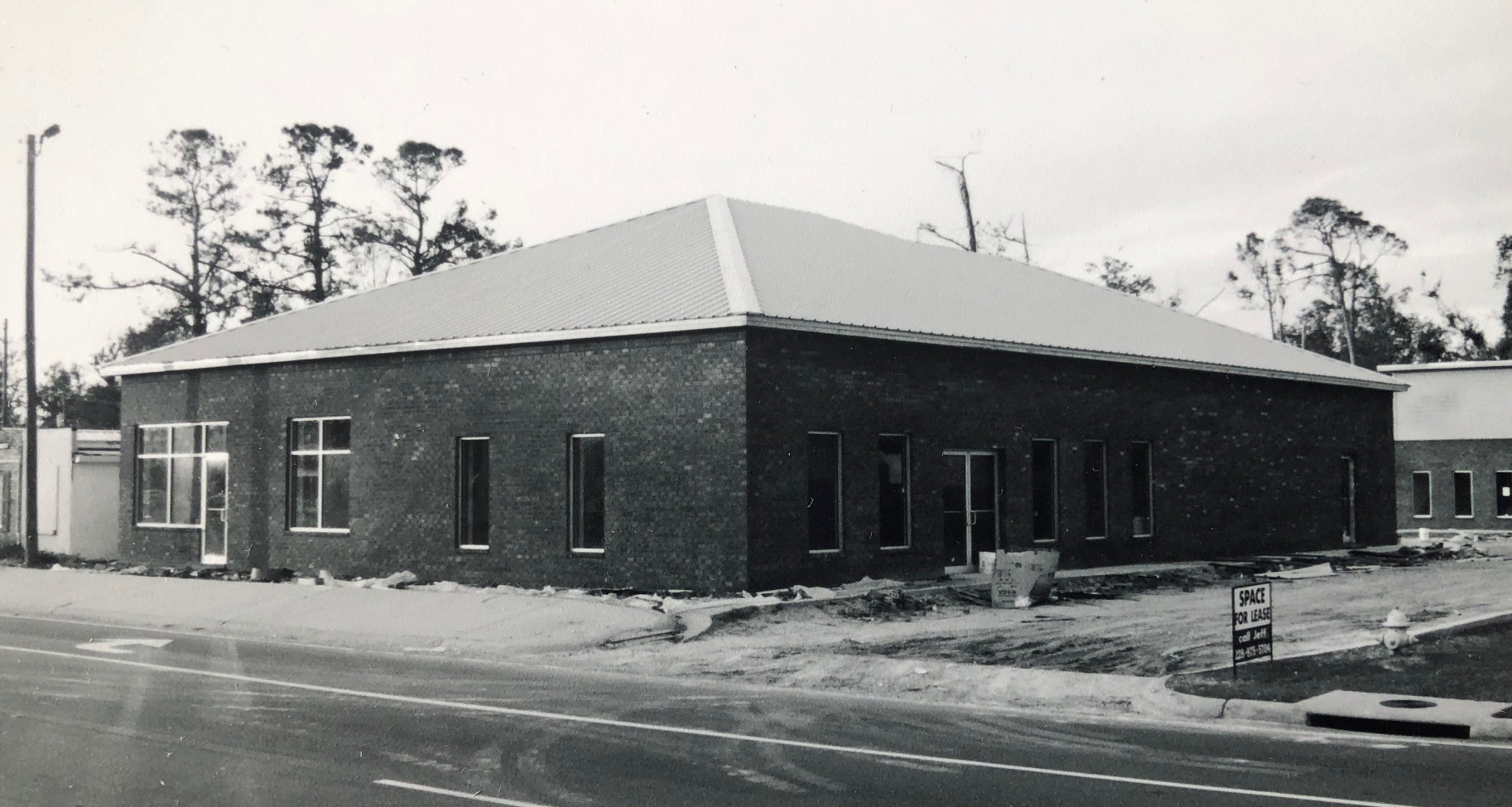 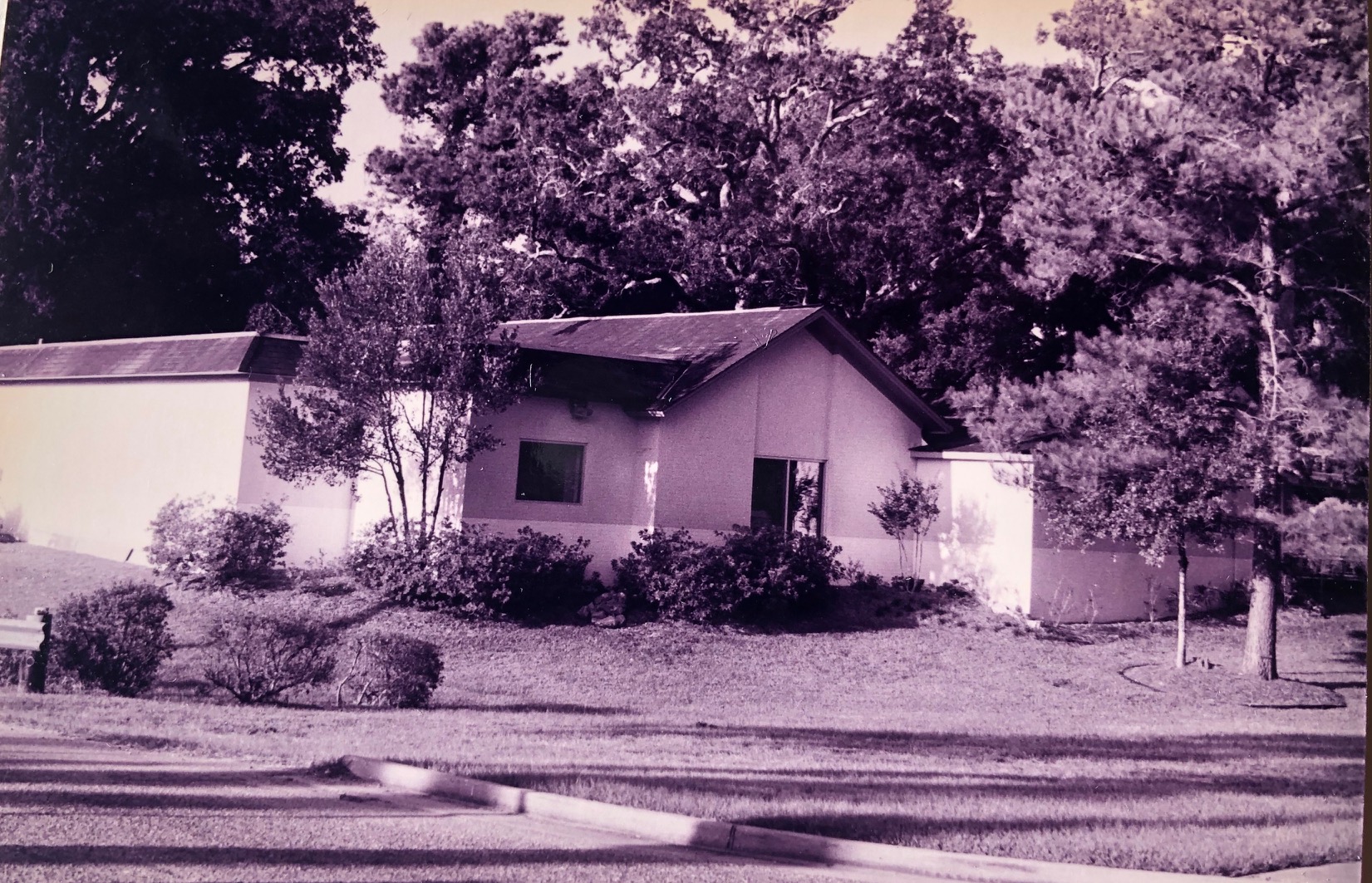 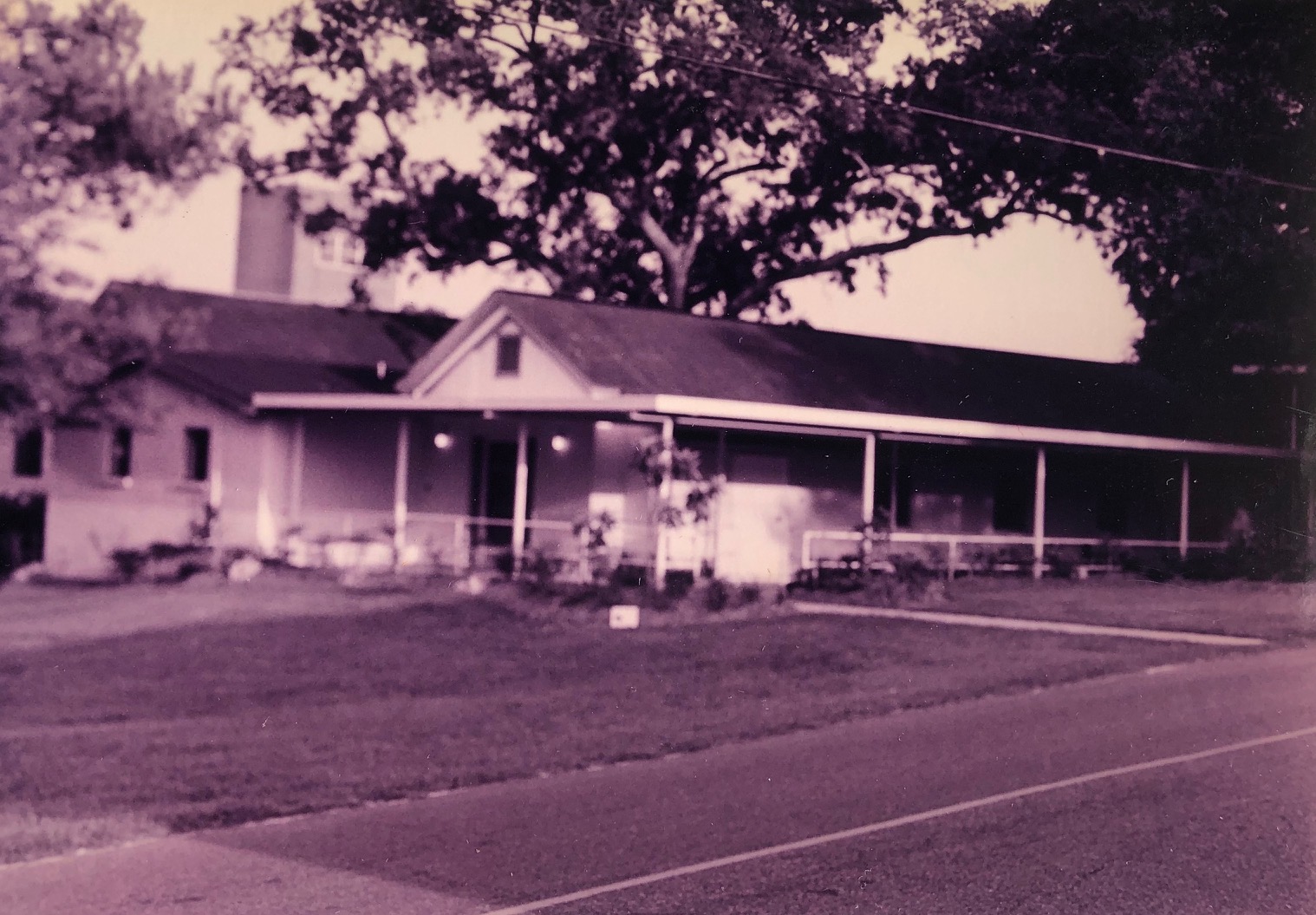 Opened September 9, 1961 by Jeremiah J. 'Jerry' O'Keefe III [1923-2016] and named for his father.  Erected by Fletcher Construction Company of Pascagoula, Mississippi from a Claude Lindsley design.[The Daily Herald, September 11, 1961, p. 16]  In 1994-1995, the OS Public Library moved here from Dewey Avenue while being remodeled.  In August 1997, the building later became the O'Keefe Foundation's New Hope Center and was later used by the local YMCA.

This small commercial building was removed from the streetscape in November 1999.

[situated on the northeast corner of Holcomb and School Street.  it was demolished in April 1999 because it was used by vagrants and alleged to be a 'crack house'.  Once owned by Early Johnson.

The Macedonia Missionary Baptist Church removed their sanctuary preserving a portion of the rear of the building in September 1998.  A new sanctuary was erected commencing in December 1998, by Fletcher Construction Company.  Carl Germany was the architect for the new sanctuary, which was dedicated in August 1999.

When David Cole and E. Stephen "Jake" Jacobs refurbished and made additions to the 1894 E.E. Clement house at 604 Porter, they removed the Wilbur Motel-Caper's Apartments.  Wilbur C. Wisnasky (1909-1990) erected these concrete block building in the early 1950s and called them Wilbur's Motel with the advertising theme of : "Come For A Season or Come For A Day". Mr. Jacobs was the proprietor of THE PORTER HOUSE, a successful dining establishment with a southwestern flair.

Alfred "Fred" Russell Moran Jr. had these rental homes in the Black community demolished in the winter of 1998 to build the new Ocean Springs Lumber Company building materials storage building at  1611 Government Street, which was erected in March-May 1998.  824 Ward was the home of Freddy Weldy (1925-2000), head of the Ocean Springs Water Department.  The Weldy cottage was probably once a part of the "turpentine camp" of Hiram F. Russell (1858-1940), Fred Moran's great grandfather, that house workers for the Gay-Hamill Turpentine Company twenty-five barrel turpentine still, which was situated near here.  832 Ward was occupied by Ester Mae Clayton before her eviction.

This building materials warehouse was built by the Ocean Springs Lumber Company of Alfred "Fred" R. Moran Jr. in the spring of 1998, when the lumber company moved from Bowen Avenue to Government Street.

Curtis Lloyd removed this home and built a new one here in April 1998.

Jerry Pelham acquired the property from the Ocean Springs Lumber Company, an A.P. Moran family enterprise, in February 1996.  It was destroyed in September 1996, except for the porto cochere.  Immediately, Mr. Pelham built a replica of the old structure with Danny Jalanivich as contractor.

This building was demolished on September 17, 1996.

This commercial building was demolished on March 10, 1994.  It was situated on the NW/C of Cox Avenue and Bienville.  A Sonic Drive-In was erected here in the fall of 1997.

Built in the early 1960s, by H.E. Lott for C.E. 'Chuck' Hussey (1918-1995) of Ocean Springs as 'Tony's Spaghetti House' in the Springs Plaza Shopping Center.  This location later became a popular "local watering hole" known as The Village Inn and Dixie Diner, which was demolished in the summer of 1991.  A new building was erected to house the KnightTime Video Store.  Night Gallery, another video store, replaced it and is operating here in 2007.

The former Duncan Sinclair Estate home is the present site of the Gulf Oaks Condominiums on Front Beach Drive, which were erected in 1973 by Charles Moschella and Palmer R. Lake Development.  Duncan Sinclair (1868-1902) and Frank Faesell (1870-1953) were long time owners of this structure.  Mr. Moschella acquired the property from William Van White in October 1972.

This Queen Anne Cottage was owned by Ocean Springs School Superintendent, Miss Mary C. O'Keefe (1893-1980).  It was probably built by the Herman Nill family of New Orleans in the late 19th Century.  Miss O'Keefe and her brothers acquired it from Daniel Dick (1900-1971) in August 1925 for $1200.  She acquired it from them in July 1930.  Miss O’Keefe sconveyed her Porter Street cottage to the Catholic Charities Housing Association in February 1970.  It was removed when The Villa Maria was erected mid-town between April 1970 and September 1971.

West side of Washington Avenue between Bowen and Government Street

The Queen Anne Cottages were erected by E.W. Illing (1870-1947) after the 1905 demolition of the Illing House, a large inn on the northeast corner of Washington and Porter.  They were moved or demolished in1968, when the First Baptist Church of Ocean Springs acquired the Illing property and also removed the Illing's Theatre.  Note the 1909 sanctuary on Porter and Bellande.

The Frank E. Schmidt Building was erected circa 1910 on the northeast corner of Washington Avenue and Desoto as a livery stable for Frank Joachim.  It was demolished in 1967 to erect the First National Bank of Ocean Springs, which  opened for business on November 25, 1968.  The $104,500 building was erected by J.O. Collins from a Claude Lindsley design.  Hancock Bank occupies this edifice today.

(northeast corner of Washington and Porter)

For over seventy years, this 1886 structure stood as a landmark on the streetscape of the central business district of Ocean Springs.  It was situated on the west side of Washington Avenue between Bowen and Government Street.  The former Davis Brothers mercantile store building was demolished in late 1957 by Clarence E. Galle (1912-1986) for the salvage of its valuable, heart pine, lumber.