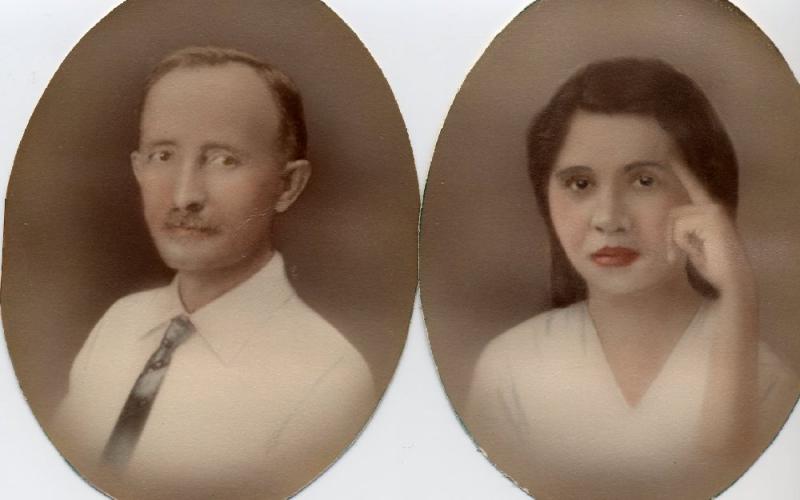 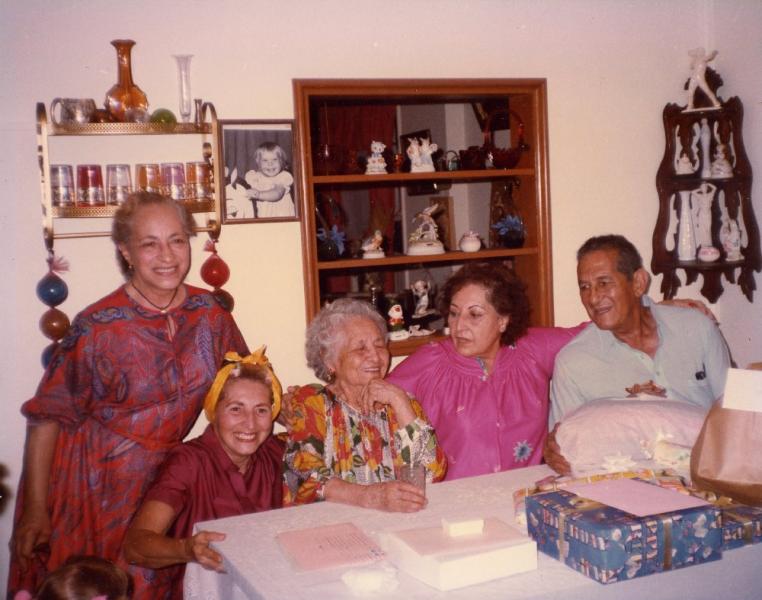 In March 1931, Otto Weyerstall was the host to several Central Americans who were domiciled at New Orleans.  Among these distinguished visitors to Ocean Springs were: A.E. Jimenez, Guatemalan representative, and Consul Schmidt of Honduras and family; Senora Soto and daughter; Marco Figuero (sic) (1903-1980); and Pomp Romero.  Three cadets from the Gulf Coast Military Academy, Garcia, Valenzuela, and Matinez, were also among the guests.(The Daily Herald, March 18, 1931, p. 3)

Hellmuth F. Weyerstall spoke fluent German and served in the American Expeditionary Force in Europe during WWI.  Here he earned the moniker, Grey Ghost.  Weyerstall would crawl out of the allied trenches, cross no-man’s-land, and slip into the German fortifications.  Here with his superior knowledge of German, he wrecked havoc upon the enemy.  After the war, Hellmuth lived in Butte, Montana and survived prospecting for gold in the Rocky Mountains of western Montana.  He was awarded the Bronze Star.  Upon Helmuth’s demise in 1970, President Richard M. Nixon (1913-1994), called his half-sister, Martha Weyerstall Potter, to express his condolences and appreciation to the Weyerstall family.(Robert W. Potter, July 6, 2004)

Circa 1925, before the Great Depression, Otto Weyerstall acquired 60-acres on Le Moyne Boulevard north of Gulf Hills.  Otto remained in Honduras while his family lived north of Ocean Springs.  During his absence, they cultivated pecans and called their orchard, “Laura Acres”.  In June 1926, Otto Weyerstall sent an old Spanish church bell from San Pedro Sula, Honduras to St. Joseph's Mission church in Gulf Hills.  The 200 pound bell was 26 inches tall and 22 inches in width at its rim.  The peal of the Weyerstall bell was a audio reminder of  his love for God and family.(Way Down South, July 3, 1926, p. 7)

For many years, the Weyerstall family lived on the northwest corner of Iberville and Washington Avenue in a Queen Anne cottage let from Arthur E. Westbrook (1884-1945) and Louise A. Ernst Westbrook (1881-1962).  This structure is extant at present day 1201 Washington Avenue and is a commercial rental today.   MiMi Weyerstall later rented the Charles W. Eglin (1883-1966) and Gertrude “Gertie” Galle Eglin (1899-1951) bungalow also on Washington Avenue.  Long demolished, the Eglin home was situated between the present day office of Hayden Dent, Esquire and Burger Burger.(Robert W. Potter, July 6, 2004)

In August 1957, MiMi and her daughter, Martha W. Potter acquired a small cottage at present day 411 Jackson Avenue, from Raymond H. Schademann, a resident of Dade County, Florida.  It appears that Mr. Schademann was in the military and was probably stationed at Keesler AFB before his transfer to southeastern Florida.  While speculating, it is very likely that Raymond H. Schademann was from Nebraska.  Most of the Schademann’s today reside in rural areas of eastern Nebraska.(JXCO, Ms. Land Deed Bk. 170, p. 48)

Henry Weyerstall (1913-1987) was born at Quirgua, Guatemala, on September 13, 1913.  He graduated from the Ocean Springs Public School with the Class of 1934, where he was an excellent athlete and football star.  Before he joined the military, Henry was employed at the Shearwater Pottery and wrote a sports column for The Jackson County Times, “Henry Chats”.  He coached the Ocean Springs Junior Greyhounds football team in the fall of 1939.  Henry Weyerstall married Mattie Mae Turner in 1942 at Mobile.  She was the daughter of Hiram Turner (1885-1968) and Bessie Benjamin Turner Vick.  Mr. Turner, a native of Conecuh County, Alabama, was the L&N station agent at Ocean Springs.

Henry and Mae Weyerstall had a daughter, Judy Derrel Slyfield Brokl, born at Mobile in September 1943. After graduating from high school she attended Youngstown State (Ohio) and graduated from the University of Alabama in 1965 with a B.A. degree in European History and English Literature.  Later Derrell studied nursing in Minot, North Dakota and finished this program at USM-Long Beach.  She was employed at Gulfport Memorial Hospital and is now retired from supervising cardiac rehabilitation therapy.  Derrell had married William F. “Billy” Slyfield (b. 1943) in December 1965, at St. John’s Episcopal Church.  After this union ended in divorce, she met Tom Brokl (b. 1941), a native of St. Paul, Minnesota, at New Orleans.  They wedded in October 1976.(JXCO, Ms. Circuit Court MRB 106, p. 374 and Derrel Weyerstall Brokl-July 6, 2004)

Henry Weyerstall had an outstanding military career.  He joined the Mississippi National Guard and trained at Camp Blanding situated near Starke, Florida.  During WWII, he served in the Philippine Islands after General Mac Arthur’s retreat from Corregidor Island in 1942.  During the Filipino Liberation Campaign, Henry lived with the Filipino natives and spied on Japanese naval and troop movements.  He was awarded the Bronze Star for his contributions here.  Henry retired from the Army as a Lieutenant Colonel with the majority of his military experience associated with intelligence gathering and interpretation.(The Ocean Springs Record, January 29, 1987, p. 3 and Robert W. Potter, June 2004)

The Weyerstalls lived at Mobile after the war, but later relocated to New Orleans where Henry became engaged in the import-export business.  In retirement, they returned to Ocean Springs and lived at 1608 Kensington Drive.  Henry bought a pottery’s wheel and made plates and bowls.  He had his own kiln and glazes and also made molds.(Mrs. H. Weysterstall, January 31, 2000)

Margarita “Gita” Weyerstall (1916-2003) was born July 18, 1916, in Guatemala.  She attended Ocean Springs High School and graduated in 1936 as Class Salutatorian.  Margarita was studying modern languages at the Mississippi Synodical College (1882-1939) when it closed in 1939.  Located at Holly Springs, Mississippi, this small liberal arts school, the successor of the Maury Institute, was merged with Belhaven College in Jackson.  Gita Weyerstall transferred to Ole Miss and received her B.A. and M.A. Degrees in Spanish from that Lafayette County institution, graduating in June 1941.  She did graduate work at the University of San Carlos in Guatemala, City, Guatemala.  Gita Weyerstall’s doctorate in Spanish was awarded from the University of Jaime Balmes, Guadalajara, Mexico.(The Jackson County Times, January 21, 1939, p. 3 and June 21, 1941, p. 4)

Margarita Weyerstall married Roy N. Mills of Holly Springs, Mississippi in the Presbyterian Church at University, Mississippi on January 15, 1939.  Mills was a technician with the Mississippi State Geological Survey at Oxford.  They had a son, Charles “Chuckie” Mills (b. 1949).  Roy later studied art at the University of Minnesota.  He taught art history at Youngstown State and was the assistant curator at the Butler Institute of American Art, also located in Youngstown, Ohio.  Friends remember Roy as a “frustrated” concert pianist.(The Jackson County Times, January 21, 1939, p. 3 and Robert W. Potter, June 2004)

In 1946, Margarita W. Mills had her first textbook published by Longmans, Green & Co., called Easy Spanish American Reader.  It was co-authored by Raymond L. Grismer (1895-1979), of the University of Minnesota.  Mrs. Mills nom de plume was Margarita Molinos.  Molinos is Spanish for “mills”.

By 1950, Margarita was on the faculty of Youngstown College, now Youngstown State University, at Youngstown, Ohio.  She taught anthropology and was the assistant professor of Spanish.  While at Youngstown, she founded the Los Buenos Vecinos, “The Good Neighbors”, a club for Spanish language majors.  In August 1951, Margarita taught at St. Carols College for Women.(The Daily Herald, July 25, 1951, p. 3)

In August 1953, Margarita W. Mills (Molinos) had a history textbook, Conquistadors y Defensores: Stories of the Spanish Conquest in the New World, and the heroic Defense of Their Homes by the Indians, published by the D.C. Heath Company, also with Raymond L. Grismer.  It was to be used by Youngstown College, Western Reserve, New Jersey College for Women, and the University of Minnesota.(The Gulf Coast Times, August 6, 1953, p. 5)

Circa 1958, Margarita divorced Roy N. Mills and later married Dr. Donald J. Metzger, an anthropology professor who taught at nearby University of Akron.  He was a graduate of the University of Pittsburgh and in 1989, co-authored a Kent State University, archeological research paper titled, Krill Cave: A stratified Rock Shelter in Summit County, Ohio.(Robert W. Potter, June 2004)

In retirement, Professor Margarita W. Metzger-Mills was lauded as follows:   Dr. Metzger contributed greatly to improving teaching across the curriculum by designing and teaching courses in the Department of History and in the Department of Sociology, in addition to her workload in the Department of Foreign languages and Literatures.  She also organized a cultural exchange program for the students between Youngstown and Guatemala.  The awards she received throughout her career show her commitment to teaching and service to the Hispanic community.  She is a member of various professional associations and has published articles on Hispanic literature and indigenous people of the Americas.  She has established the Margarita Metzger Summer Study Abroad to encourage and support Spanish majors at Youngstown State University.(www.as.ysu.edu)

Maria Elsa Weyerstall, called Elsa, was born January 26, 1919, in Honduras.  She graduated from Ocean Springs High School in 1940.  Elsa was employed at the knitting mill in Pascagoula.  On November 18, 1944, during WWII, she married Terry E. Sorby (1922-1977) in Harrison County, Mississippi.  Elsa had met Terry while he was stationed at Keesler Air Force Base at Biloxi, Mississsippi.  They moved to San Bernandino, California where Mr. Sorby made his livelihood as a psychologist in the civil service system.  Elsa and Terry E. Sorby were the parents of: Sherri S. Ortiz and Betty Anne S. Worthington.  Mrs. Sorby resided in San Bernadino, California until her death on April 23, 2008.(Robert W. Potter, July 2004 and Harrison Co., Mississippi MRB 66, p. 406)

Bob Potter is a veteran of WWII.  He was drafted into the Army Air Corps shortly after his wedding to Martha.  Bob served his country in the South Pacific in the 20th Air Force as a flight engineer on board a B-29 Super Fortress.  He was stationed in India and Tinian and flew on twenty-six combat missions in Southeast Asia against the Japanese Empire.  He now resides at 411 Jackson Avenue.(The Sun Herald, June 11, 2004, p. A-5)